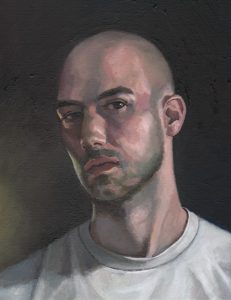 Ryan is classically trained in representational drawing and painting with a heavy focus on portraiture and the human figure. During his years at the School of the Museum of Fine Arts in Boston, Massachusetts, he honed his technique while at the same time maturing conceptually. Over the years he has found a way to incorporate his unique sense of humor in projects ranging from t-shirt designs (for his indie t-shirt company Donkeyshines) to public art (in Somerville, Massachusetts).

Ryan’s most recent work explores the idea of complex morality by adding sensual imagery to recognizable figures that are usually associated with simplicity and innocence. At the same time, he sets out to portray characters, which, at first glance, might appear to be deplorable, with a level of understanding and compassion. His work takes inspiration from the sci-fi erotica and bizarro fiction subgenres that have been growing in popularity for a dedicated niche group of readers. This has lead to work on book covers for authors R.K. Galaga and H. Seitz. One of his more risqué pieces was recently featured in an issue of Maxim Czech.